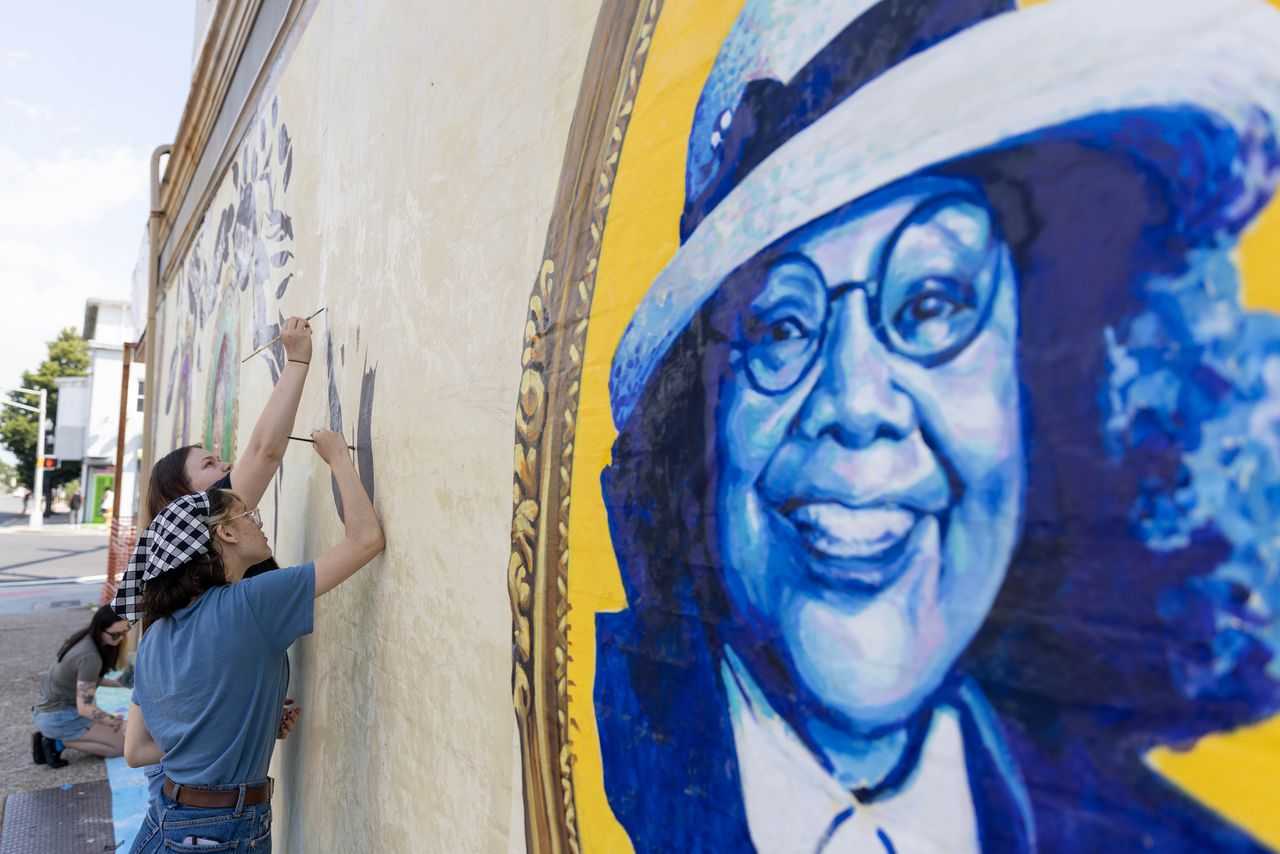 A three-story mural of historic photos debuted this month in Atlantic City.

The snaps include one of a young Muhammad Ali and another of Martin Luther King Jr. in a linen shirt and shorts at nearby Chicken Bone Beach. A third is from Fannie Lou Hamer, who came to national attention at the 1964 Democratic National Convention, held in Atlantic City. She is known for leading the Mississippi Freedom Party’s efforts to shine a light on the virulent racism in the South that was costing black lives.

All of the photos were from Atlantic City in the 1960s. This mural and another were done to mark the return of the NAACP National Convention this month. A collaboration between the University of Stockton, which has a satellite campus here, and local public art advocates did.

“One of the biggest things is reinventing the space,” said Zach Katzen, owner of Create 48 and co-owner of Union Hall Arts, community groups that both participated in the project. “When it goes up like that, it’s so unexpected. It’s as if someone had turned on a light bulb in a dark room. You can see the possibilities. You may begin to feel a connection, especially if you feel like you are reflected in this public art.

Katzen’s band title, Create 48, is inspired by the 48 city blocks of Atlantic City. He lived here on and off for decades and worked as an organizer advocating for public art and community empowerment.

Katzen is not an artist, but his gallery Create 48 and Union Hall Arts help artists realize their visions. Stockton University officials also wanted to help. The Noyes Museum of Art in Stockton, at its Atlantic City campus, and the college of arts and humanities paid $23,000 for the two murals, both on private property with the owners’ consent, said Michael Cagno, the director of the museum.

The project was launched earlier this year when Katzen and other community leaders were attending Stockton’s African-American Cultural Heritage Short Course. There he connected with local historian Lester Muhammad, who knew Ali and provided the photo used in the mural. And since Stockton had honored Hamer by naming an event hall on his campus after him, Katzen felt his photo would be the perfect final piece, according to a school statement.

The other mural features paintings by Juanita High, founding director of the NJ Equal Opportunity Fund and board member of the Stockton University Foundation; Dorothie Dorrington, educator and former chair of the Atlantic City School Board; Vera King Farris, former president of Stockton, and Hannah Pierce Lowe, former principal of Indiana Avenue Vocational School (for girls of color) in Atlantic City, according to a school statement.

Several art students from Stockton helped put the finishing touches on the mural, which was painted on canvas and installed on a wall on Martin Luther King Jr. Boulevard and Atlantic Avenue.

“I’ve never done anything like this before,” said Alexandria Montalvo, a specialist in art history and studio art from Mays Landing. “So it’s really cool that I can say to people, ‘Look at this, I helped with this.'”

This mural was created by Brigantine artists Charles Barbin and Randi Meekins, who are not students. The photomural was created by New York artists BK Foxx and Claudio Picasso, also non-students, and was painted entirely with spray paint on a wall at the corner of Providence and Atlantic Avenues near the Stockton satellite campus. . Stockton’s main campus is in Galloway, Atlantic County.

“These murals remind people of this community that they come from a place of greatness, history and tradition,” Katzen said. “A place that is so much bigger and wider than they think. Incredible things have happened here and they will happen again.

Please Subscribe now and support the local journalism you rely on and trust.

Bill Duhart can be reached at bduhart@njadvancemedia.com.

2022-07-31
Previous Post: When the aliens of Eduardo Garcia and Roberto Castro invaded Atlantis
Next Post: Fly to Dubai with Emirates and receive a full-day pass to Atlantis Aquaventure