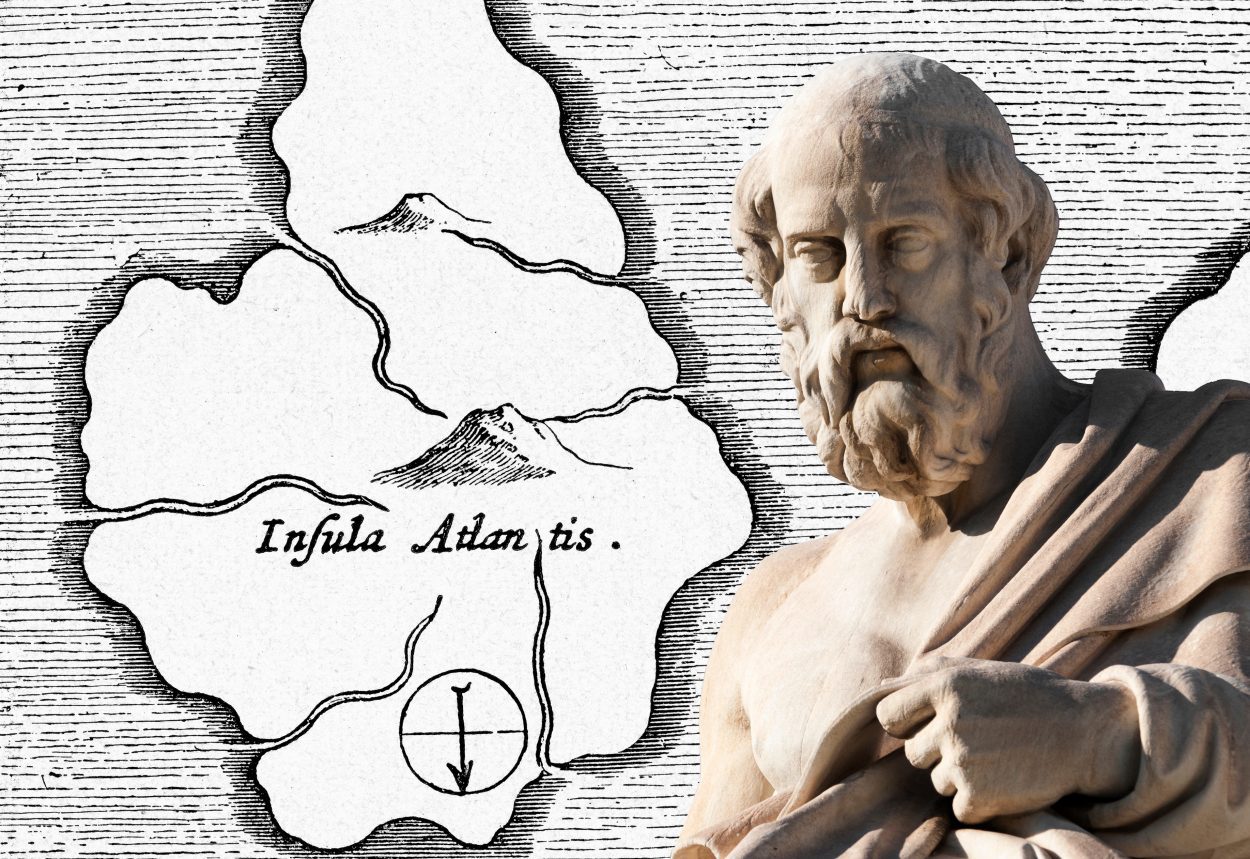 Atlantis – The Story Behind The Legend – HeritageDaily

Atlantis has become a taboo subject in many scholarly circles, often stigmatized in pseudo-science and coined interpretations of Plato’s dialogues.

Plato was a Greek philosopher from Athens in Ancient Greece during the Classic period from the 5th to 4th century BC. He was a pupil of Socrates and taught Aristotle, credited with founding the Platonic school of thought and the Academy, the first institution of higher learning in the Western world.

Plato first introduced Atlantis in the Timaeus, a monologue by the Timaeus of Locri, a character who appears as a philosopher and wealthy aristocrat from the Greek colony of Lokroi Epizephyrio. Modern scholarship tends to reject the historicity of Timaeus, viewing it as a literary construction of Plato from the characteristics of the Pythagoreans.

The dialogue begins with an account of the creation of the universe and ancient civilizations, where Socrates reflects on his ideal state described in Plato’s Republic, a Socratic dialogue written by Plato around 375 BC.

To make the perfect example, Critias goes on to tell the story of Solon’s journey to Egypt during the 7th century BC (300 years before the dialogue began).

Solon was an Athenian statesman who attempted to legislate against the political, economic, and moral decline of archaic Athens. After completing his reforms, according to Herodotus, he visited Pharaoh Amasis II in Egypt and discussed philosophy with Psenophis of Heliopolis and Sonchis of Sais.

His journey also took him to the ancient city of Sais in the West Nile Delta on the Canopic branch of the Nile. Herodotus claims that the tomb of Osiris was located at Sais, while the ancient Greek historian, Diodorus Siculus (best known for writing the monumental universal history Bibliotheca historica), attributes the construction of Sais to the ancient Athenians before the great flood .

At the time of Solon’s visit, Sais was the capital of ancient Egypt during the 26th Dynasty and had great worship at the temple of Neith, a goddess associated with creation, wisdom, weaving, and warfare. According to Critias, it was here that the legend of Atlantis was first described, with temple priests recounting Solon with tales of the fallen civilization 9,000 years before.

Based on the priest’s timeline, Atlantis is placed in the 10th millennium BC at the start of the transition from Paleolithic to Neolithic via the Intermediate Mesolithic. Prehistoric peoples began to develop agriculture and complex communities that built monuments such as Göbekli Tepe and Hallan Çemi Tepesi, both in southeastern Anatolia, and the Star Carr site in North Yorkshire, in England.

Plato then develops the story: “For it is related in our annals that it was once your State which checked the course of a powerful army which, starting from a distant point in the Atlantic Ocean, advanced insolently to attack the whole of Europe and Asia to boot.

For the ocean was then navigable there; for in front of the mouth which you, the Greeks, call, as you say, “the columns of Heracles”, (an expression which applied in antiquity to the promontories which flank the entrance to the Strait of Gibraltar) extended an island larger than Libya and Asia together; and it was possible for travelers of that time to pass from it to the other islands, and from the islands to all the continent opposite them which contains this true ocean.

For all that we have here, lying in the mouth of which we speak, is evidently a haven having a narrow entrance; but there is a real ocean, and the land around it may justly be called, in the fullest and truest sense, a continent.

Now, in this island of Atlantis, there existed a confederacy of kings, of great and marvelous power, who ruled over the whole island, and over many other islands also, and over certain parts of the continent; and, moreover, from the lands here in the strait, they ruled Libya as far as Egypt.

The Critias, another of Plato’s dialogues (often combined with the Timaeus) again features Timaeus, Critias, Socrates and Hermocrates, and describes in detail the ancient city, the landscape, the fauna and flora, as well as the structure of the society and the means of governance.

Critias speaks of an ancient time when the regions of the world were divided among the gods. Atlantis was positioned in Poseidon’s domain, where Poseidon fell in love with a mortal girl named Cleito and bore her many children, the first of whom was named Atlas, king of all the island kingdom and the ocean.

The Atlanteans built a great metropolis, surrounded by concentric bodies of water connected to the sea by a great canal. In the center was a palace on a small mountain which contained a sacred temple dedicated to Cleito and Poseidon, and golden statues of all the descendants of the ten kings and their wives.

In the dialogue, Critias emphasizes the virtue of Atlantis: “For many generations, as long as the divine nature endured in them, they were obedient to the laws, and well affectionate towards the god, whose seed they were; for they possessed real and in all respects great minds, uniting gentleness with wisdom in the various chances of life and in their dealings with each other.

They despised everything but virtue, caring little for their present state of life, and thinking lightly of the possession of gold and other possessions, which seemed to them only a burden; neither were they intoxicated by luxury; wealth did not rob them of their self-control.

Over time, the divinity of the Atlanteans gave way to the corruption of human nature for which Zeus sought to chastise: “Zeus, the god of gods, who rules according to law, and is able to see in such things, perceiving that an honorable race was in a lamentable situation, and wishing to inflict chastisements upon them, that they might be chastened and better themselves, gathered all the gods into their most holy habitation, which, being placed in the center of the world, behold all created things. ”

From here, the rest of the dialogue is incomplete, but the events previously described by Critias state that the continent suffered a series of major earthquakes and sank under the sea.

In the years following the dialogue, many ancient writers such as Xenocrates considered the story of Atlantis to be historical fact, but some considered Plato’s work to be fictional or metaphorical myth.

Despite its minor importance in the larger works of Plato, the story of Atlantis has had a considerable impact on literature. The allegorical aspect of Atlantis was taken up in the utopian works of several Renaissance writers, such as Francis Bacon’s New Atlantis in 1626 and Thomas More’s Utopia in 1516.

Santorini is the most interesting parallel, where a Bronze Age Cycladic city called Akrotiri became a commercial hub during the 3rd millennium BCE. The city had richly decorated multi-storey buildings that used an advanced sewage system, predating many contemporary civilizations down to the Romans.

Akrotiri was destroyed during the Theran eruption during the 17e or 16th century BC, devastating the city and nearby island communities with earthquakes and tsunamis. The eruption deposited layers of pumice and ash, burying Akrotiri up to 7 meters in material that was followed by pyroclastic surges, lava flows, lahar flooding and ashfall deposits from co-ignimbrite.

Some historians believe that the destruction of Akrotiri was the inspiration behind Plato’s story of Atlantis, borrowed from oral histories and legends passed down over the centuries.

In recent years, Atlantis has been the subject of pseudoscientific speculation, often synonymous with any and all, supposed advanced prehistoric civilizations lost to the annals of time.

2022-07-10
Previous Post: RBDCK to Acquire Land for Atlantis Railway Bridge in Kochi
Next Post: The city needs certainty that our global outlook will continue despite the high political drama