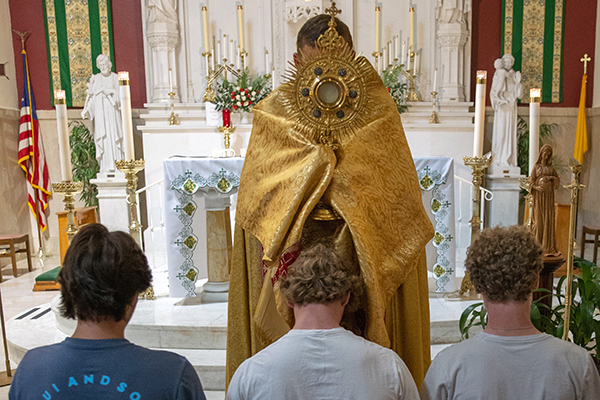 Lives changed during Summer in the City

ABSECON — Three years ago, 14-year-old Gabe McGlinchey was going through a tough time in his life; his friend had just died in an accident, and the last place he wanted to be was a summer residence.

“My mother pushed me to go; I wasn’t looking forward to it,” said McGlinchey, of Saint Simon Stock Parish in Berlin, of the annual week-long Summer in the City service immersion experience.

Gradually, however, her feelings began to change. “On the second day, I finally stepped out of my comfort zone and started talking to people,” he said.

Her “light bulb” moment, however, came midweek, during an evening of Eucharistic adoration. As he and other young people from across the Diocese of Camden knelt before the Blessed Sacrament, he found God’s wisdom in silence.

“I felt so close to the Holy Spirit,” recalls McGlinchey. “The Lord told me it would be all right, and He told me to heal through [the] do good deeds. »

Now 17, McGlinchey was one of 16 young women and men to take part in this year’s Summer in the City held August 14-20. Residing at the Blessed Carlo Acutis Center during the week, the teens ventured to different locations each day to serve others across Atlantic City.

“We work through Christ and change lives,” McGlinchey said. “Every day here, when I help someone, it’s my year. It’s a feeling of happiness.

Among the worksites was Father Benedict House in Atlantic City, where the Franciscan Sisters of Renewal are preparing for a new group of young women who will spend September-May in discernment. Other services included the beautification of Holy Cross Cemetery at Mays Landing; making meal bags for the hungry at the Catholic Charities Diocese of Camden’s Atlantic City and sorting food items at the Community FoodBank of New Jersey, Egg Harbor Township. The teens also made new friends during a day of activities with those from The Arc of Atlantic County.

“For most of these young people, Summer in the City is the highlight of their summer,” said José Rodriguez, director of the Diocesan Family and Youth Office, which sponsored the week. He praised the teenagers for being “open to meeting new people and experiencing new things together”.

On the feast of the Assumption of the Blessed Virgin Mary, teenagers served as ushers during mass and walked with Bishop Dennis Sullivan in the wedding procession from the sea to St. Nicholas Church in Tolentine of Atlantic City, Saint Monica Parish.

Tyler Wimberg, 16, of Saint Gianna Beretta Molla Parish in Northfield, said he saw Jesus in a man named Mike, whom he met while serving food to the homeless at Father Benedict House.

“Mike lives under the boardwalk,” Wimberg said. “He thanked me so many times for serving him and talking with him.”

Taking advantage of a time out, Anna Diaz and Anna Wills sat down in front of blessed center Carlo Acutis as they explained they were strangers just 72 hours earlier. Diaz, 16, from St. Clare of Assisi Parish in Swedesboro, said she was happy to have met Wills, 18, from St. Simon Stock Parish.

“We became sisters in Christ,” Diaz said as the two hugged.

At Benedict House, the first comer not only made toiletry bags for visitors, but met people who told stories about their struggles with addiction. “The week opened my eyes to what people are going through,” Diaz said. “It’s good to help people and to grow in relationship with God and others.”

When asked if she would recommend Summer in the City to others, Wills, who is in her second summer with the program, smiled and gave a thumbs up. “When I’m here, my heart is not so heavy.”

As the week began to draw to a close, An Nguyen, 20, of Most Precious Blood parish in West Collingswood, reflected on the values ​​gleaned from Summer in the City. She first participated in 2016, returning for three more summers before becoming a chaperone.

She said she was heartened to see young people “learning to love Summer in the City like me and realizing what their service does for someone else. They may not have [the realization] now, but in a week, they’ll look back and be like, ‘Wow, I really did all that.’ »

For more on Summer in the City, check out a Photo gallery or watch a video chronicling the week.