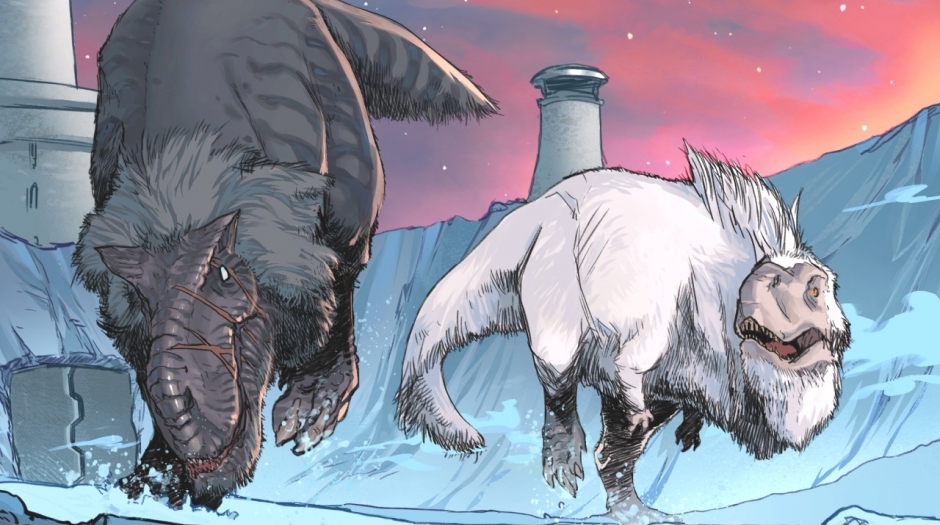 “I’ve dreamed of this project almost my entire life,” said Mark Warshaw, co-founder and president of office of magic, a leading animation and live entertainment company. To be precise, he’s been dreaming of putting his own spin on the fabled story of the sunken city of Atlantis (with a dino-infused twist) since he was seven years old.

With credits such as Lost in OzEast Los High, Smallville, and HeroWarshaw is currently collaborating with a small but mighty team on a graphic novel set in the “future ancient” titled “Five Nations: The Age of Atlantis”.

The book focuses on the parallels found between the myths of Atlantis and the world we live in today. For example, some tales of Atlantis chronicle a time when warring factions misused powerful laser-based technology for material gain that led to cataclysmic environmental disasters. Sound familiar?

The “Five Nations” team creates a menagerie of believable, recognizable, and awe-inspiring dinosaurs while working asynchronously across the world.

Warshaw notes, “We collaborate remotely between me (based in California), our editor (based in Paris) and the illustrator and colorist (both based in Naples, Italy).”

About “Five Nations: The Age of Atlantis”

Five heroes from five nations must put aside deep-rooted cultural differences to stop the dinosaurs that threaten mankind’s existence.

The “Five Nations” saga begins when a young hero creates a weapon to protect his people from the polar dinosaurs that invade his nation. When his invention falls into the wrong hands, it plunges the five nations into a global war between humans and dinosaurs and ultimately leads to the great flood that sinks Atlantis – burying its stories, secrets and mysteries…until now.

“Five Nations: The Age” of Atlantis is the story of humanity surviving the last era of climate change and the heroes who helped us do so. It celebrates the resilience of life in the face of its ultimate challenge.

“We’ve been developing this story for over 25 years,” Warshaw shares. “But we chose to do it now because it really is the right time to tell the story of Atlantis. In summary, it is about an ancient modern civilization that harnessed the most powerful force of nature, abused it for material gain, and eventually got swallowed up by the seas because of it. Also, drawing stories with dinosaurs, flying machines, and laser guns is a lot of fun.

There are five volumes planned for the graphic novel series. The IP is also being developed into an animated television series and a Web3 entertainment franchise.

An overview of the production process

Warshaw and his team kicked off the project by outlining a remote creative review process, which allowed the team to create a virtual mind map to quickly get an overview of the terrain and share ideas.

Key elements of the graphic novel (such as environments, characters, props, dinosaurs, and more dinosaurs) have been organized with a concise view of revision history, setting up a framework of building blocks for fine-tune the perfect feel and tone for the project.

The digital skeleton of this massive project serves as a compass for all story and character design. With the foundation laid, the team was ready to expand from the starting point and brainstorm plot points, storylines, and character arcs.

The “Five Nations” team has created its central hub within blue landscapethe visual collaboration platform trusted by the biggest studios in the industry.

“We found Bluescape to be an exceptional solution that made it feel like we were all collaborating in the same space,” says Warshaw. “We invented an approval pipeline in Bluescape to lock in our preview and establish the look of environments, characters, props, vehicles, and dinosaurs. We use Bluescape to track every step of the production process.

The “Five Nations” team also made use of Bluescape’s brand new visual search function, popsync, to find the right look and feel for their larger than life cast. 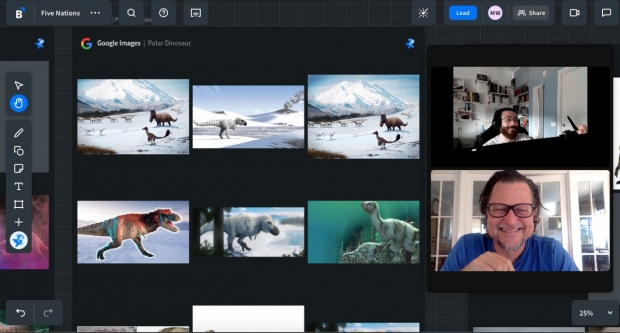 Popsync takes advantage of Bluescape visual collaboration capabilities, allowing content creators to search for the right image and share a wide variety of content for collaboration. Once the results are presented in Bluescape, individuals and teams can collectively move, annotate, and present the visuals for everything from brainstorming to creative critiques.

“We were really excited about Popsync as soon as we heard about it,” Mark said. “It’s so common in creative meetings to call out visual references. This tool allows us to do this in our workspace and integrate our selected references directly into our moodboards.”

Something big is coming soon

“Five Nations: The Age of Atlantis” is gaining momentum and will be hitting shelves soon. In the meantime, you can see Warshaw’s animated series Lost in Oz on Amazon Prime.

Want to experience Popsync for yourself? Try for free here.

Dan Sarto is the publisher and editor of Animation World Network.