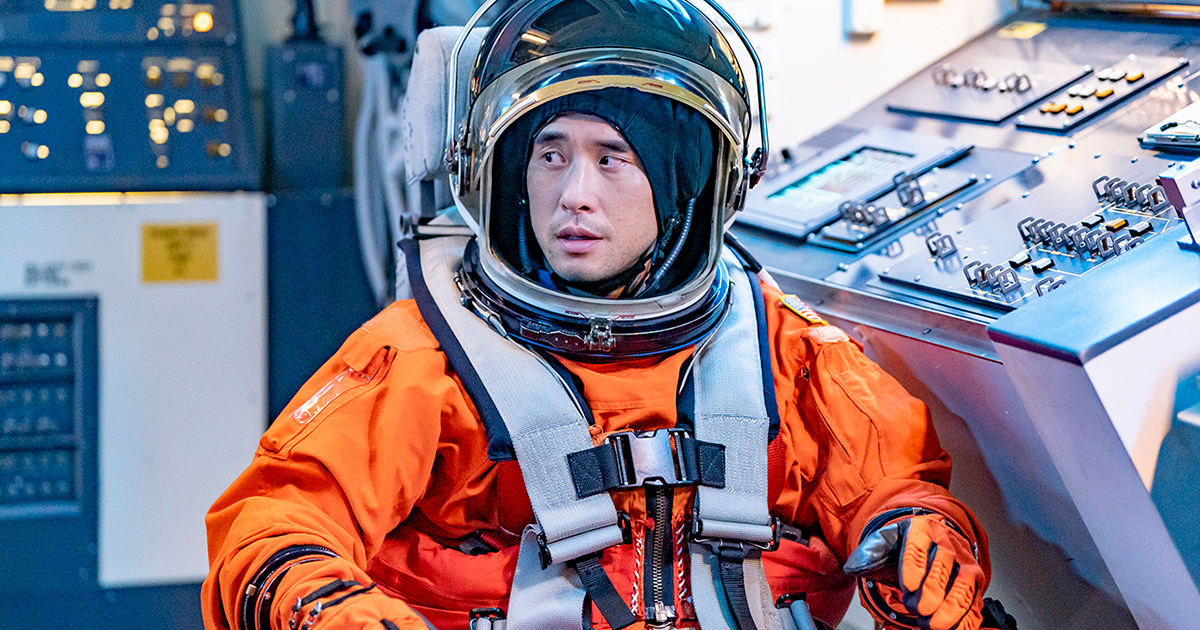 — Something in the history of the space shuttle must change.

Or so it seems to be in the second episode of “Quantum Leap” airing Monday (Sept. 26) on NBC. Titled “Atlantis,” the episode shows physicist Ben Song (Raymond Lee) in orbit aboard the space shuttle Atlantis in 1998.

A sequel to the original series that ran from 1989 to 1993, the new show picks up 30 years after Dr. Sam Beckett (Scott Bakula) entered the Quantum Leap accelerator and disappeared. Now a new team, led by Song and assisted by Addison Augustine (Caitlin Bassett), who appears as a hologram that only Song can see and hear, jumps through the story from life to life, fixing what went wrong.

“Our whole room is super sci-fi and super space and these shows are written as a group,” showrunner Martin Gero told collectSPACE in an interview. “So everyone contributed beautifully [to this episode].”

Gero said it wasn’t just Lee who experienced his character’s turn as an astronaut differently.

“Just with Raymond, well, everyone dreams of being an astronaut, right? There’s no one who hasn’t thought of it casually – I mean, some people are obviously more obsessed than most and they become astronauts – but seeing the cast manage to put on all the [spacesuit] equipment, it was so much fun for everyone,” he said.

Space Shuttle Atlantis, itself, is shown in the promo lifting off — using footage from the actual STS-122 mission in 2008 — and then orbiting Earth.

“[The scenes] encapsulate the thrill, awe and majesty of the space shuttle era and that’s what we tried to do with this episode,” Gero said.

“I was at Johnson Space Center working in mission control in 1998. It was an exciting time,” he said. “I’m glad this little snippet kind of captures that, from the moment of launch to the very end of the episode.”

“Atlantis” marks the second time that “Quantum Leap” crosses over into NASA history. The first space-themed episode aired as part of the original series and involved a different type of astronaut.

In “The Wrong Stuff”, Sam Beckett (Bakula) jumps into “Bobo”, a chimpanzee that NASA is training for possible spaceflight on January 24, 1961. The episode is loosely based on NASA’s use of great apes to prove that space travel was safe for humans before astronauts launched from Mercury.

Although the new series is a continuation rather than a reboot of “Quantum Leap,” Gero said he doesn’t expect a nod in “Atlantis” linking the two NASA-inspired episodes.

“We talked about it because it’s such a fun episode,” he said. “But I think for us, we’re trying to strike a balance between having it be our own show while also being respectful and putting in as many Easter eggs as possible from the original.”

“Atlantis,” the second episode of “Quantum Leap,” airs Monday, Sept. 26 at 10 p.m. EDT/PDT on NBC and will be available to stream the following day on Peacock.