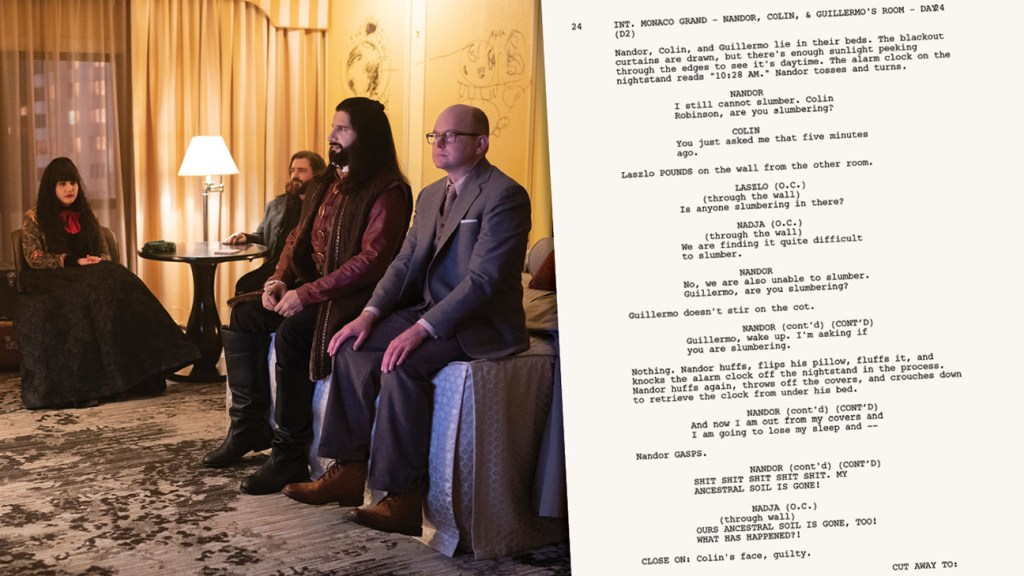 This episode of FX’s vampire mockumentary sees the entire series take a trip to Atlantic City, where Nandor, Laszlo and Nadja suddenly find themselves in deep trouble. “We’re still thinking about bits of vampire lore that we haven’t usurped on the show,” Emmy-nominated writer Sarah Naftalis says of the vampirism rule that requires bloodsuckers to keep the ancestral land in their coffins – without it they cannot rest and their powers will fade. This scene, which takes place in their hotel room as they discover that their individual collections of dirt are missing, sets up the episode’s major conflict.

“The research on this show is different than it might be on other shows,” says Naftalis, who admits learning the ancestral soil rule in the writers room. She says sometimes the research comes from “websites with lime green fonts on bright pink backgrounds”, and the seriousness of the tradition often sparks heated debate among writers. Naftalis says they write with this general notion in mind: “What are the rough rules that have remained consistent across all the many iterations of vampires?”

“The show is so delightfully silly,” says Naftalis. “Sometimes we rely on our characters’ reactions to tell us what the problem is. For most of us, a little missing dirt wouldn’t be a big deal, but for them it’s literally life or death. .

Colin Robinson, who survives by draining others of their energy with his vexatious personality, is often the bane of other vampires’ existence. “There’s something funny about the way Colin intentionally makes life worse for vampires,” Naftalis says. “But here he is making a real mistake.”

The show’s mockumentary format, which gives Colin a chance to confess his mistake, also provides a flashback to what he was doing when the hotel housekeeper vacuumed the vampire floor. “This was born out of a wonderful day in the writers room [when we] revisited casino commercials that had burned into our brains growing up,” Naftalis says. “We loved the idea that what Colin wants to do while traveling is just watch the monotonous scrolling of the hotel TV channel.” She notes that the vampires never learn that Colin is the reason for their spell: “We have the camera pointing at Colin, who just brushes him off. It’s moments like these that are so fun to write in this style.

Another fun aspect of the show for Naftalis is the supernatural elements, allowing for a lot of creativity. “It’s a funny thing – the reality of logic that you’re bound to is like ancestral soil,” she says. But that logic doesn’t apply when Laszlo unsuccessfully attempts to transform into a bat. “Our visual effects team is so amazing. You can write with the freedom and visual settings of an animated show.

“It’s also always a lot of fun when vampires take strong positions for no reason,” Naftalis says of Laszlo’s anti-sparrow stance. “I don’t know why Laszlo hates sparrows, but it’s fun to imagine how he got there.”

This story first appeared in an August issue of The Hollywood Reporter magazine.