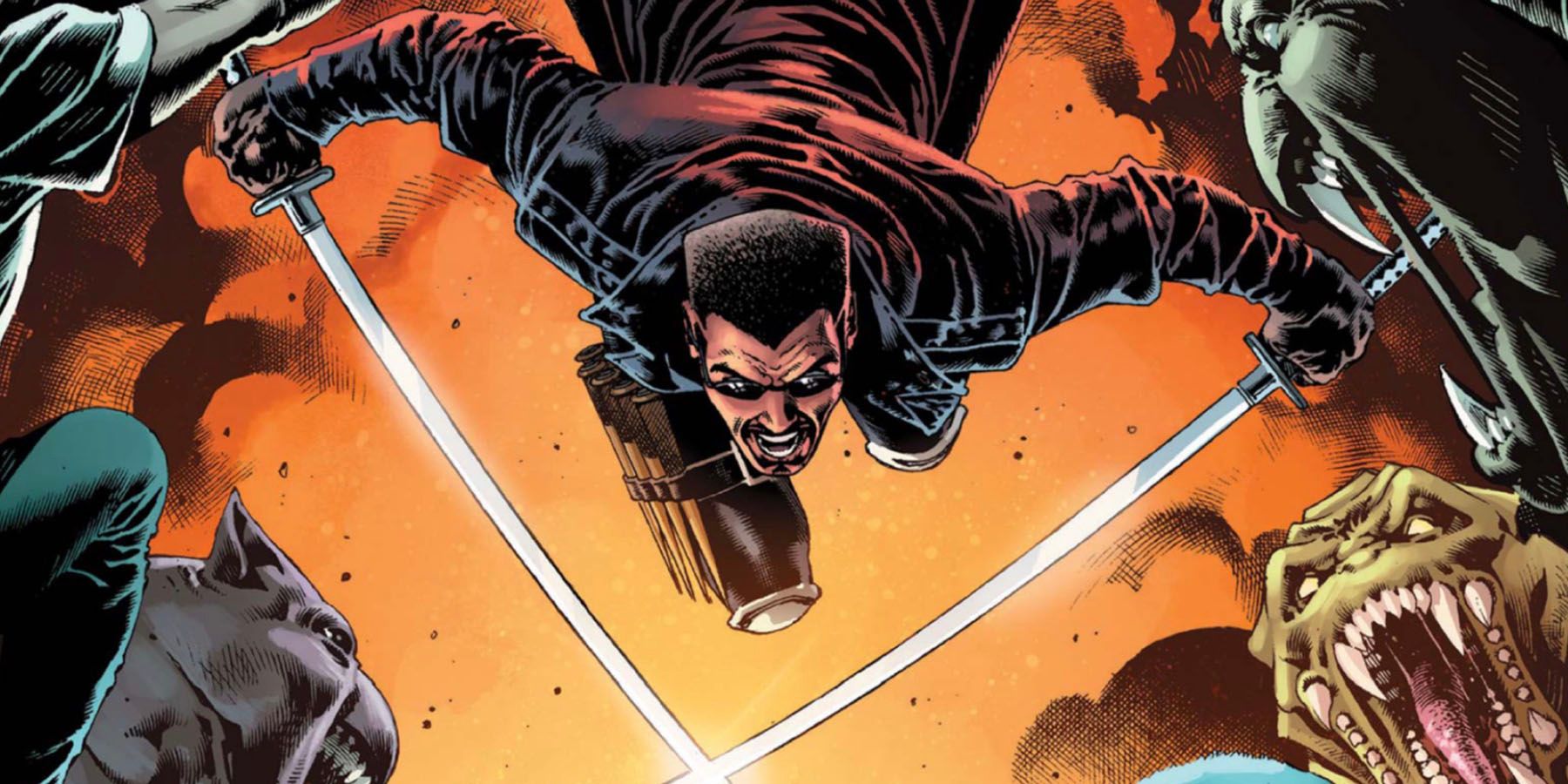 Who is Blade’s villain? Every MCU Character Theory Explained

With so little knowledge of the Marvel Cinematic Universe Blade reboot, the options are wide open for the film’s villain. Filming set to begin July 2022, details for Mahershala Ali’s Blade the reboot has yet to be revealed. Until Marvel Studios is ready to discuss the film more openly, fans will have to rely on the comic book character’s history, as well as the direction of the MCU to fuel speculation.

In the Marvel comics, Blade – birth name Eric Brooks – has his fair share of enemies beyond his personal mission to hunt and kill vampires. As a member of various hero teams, he faces many Marvel villains, some better known than others. Blade encounters Malekith the Accursed, Khonshu, and the Phoenix Force alongside the Avengers, for example. During his time with the British intelligence agency MI:13, Blade also fights supernatural enemies from the United Kingdom after the Secret Invasion event. Of course, he also regularly struggles with Dracula.

Related: Everything We Know So Far About The MCU Blade

What makes Blade interesting is its immersion in the supernatural. After getting most of its villains from other planets or dimensions, the MCU spent Phase 4 digging deeper into that side of comic book lore. Restart Blade means the studio is ready to fully commit to vampires, demons, and other paranormal enemies close to home. With that in mind, a few big names could emerge as the film’s main antagonist.

Truly, there is no Blade without Deacon Frost. As a vampire who became Blade’s mother, Frost is key to the character’s origin story. It would be understandable if the MCU chose Frost as the villain. However, that might be a risky choice because Deacon Frost was the villain in Wesley Snipes’ first movie. Blade trilogy. This movie is still so popular with viewers that they would probably be a little biased before the MCU shot. If Frost is Ali’s choice Blade reboot, the film will have to be very intentional about its casting and how it approaches the story.

A more compelling first villain would be Lucas Cross, Blade’s father. In the comics, a falsely imprisoned Cross becomes a vampire to survive his cancer. He eventually searches for his son, but his intentions are far from sentimental. He wants to force Blade to fulfill a prophecy that would return the lost souls of vampires. Considering Cross has never appeared in a Blade movie before, he would be an interesting choice for the MCU reboot. Instead of the familiar story of Blade’s mother, it would be a way to explore a darker story for the hero.

The mega-demon Mephisto would be a fun first villain for Blade. This character is more often an enemy of Dr. Strange, but he has a history with Blade. In the Heroes Reborn storyline, Blade assembles a version of the Avengers to defeat Mephisto and the Squadron Supreme. It would be an odd choice to start with an ensemble film, but fans have been clamoring for Mephisto ever since. Wanda Vision. Blade could be a surprisingly fun way to finally have the master of malevolence in the MCU.

There might not be a better villain for Blade than the Marvel Universe’s very first vampire. Varnae is a powerful wizard whose peers on Atlantis – before he sank – used the Darkhold to turn him into a vampire. Blade clashes with him during the Nightstalkers arc, where Varnae threatens to resurrect Dracula.

Of all the Blade villains, Varnae is perhaps the easiest to bring into the MCU as there is already a substantial setup for him. This wizard was actually the first person to possess the Book of Vishanti – the book of white magic that was a key plot element of Doctor Strange in the Multiverse of Madness. The Darkhold may have been destroyed in the movie, but that doesn’t mean its effects have been erased from the MCU. Additionally, if Namor appears in Black Panther: Wakanda Foreverthen Atlantis is canon and will further substantiate that Varnae is Blade’s villain.

The mother of demons, Lilith is actually the first enemy Blade faces alongside the Nightstalkers. She tries to trick Blade’s team into killing Ghost Rider, but they eventually team up to take her down. She is also connected to the next group Blade joins, the Midnight Sons, which includes Morbius the Living Vampire and Dr. Strange. This group of heroes hope to defeat Lilith and her demon, the Lilin.

While, again, it might be odd to present Blade with an all-encompassing team of heroes, Lilith is an intriguing option for a villain. In addition to being a powerful supernatural enemy, she would be the third woman to feature as the main villain. The MCU has featured female antagonists, like Proxima Midnight in Avengers: Infinity War, Agatha Harkness in Wanda Visionand Echo in Hawk Eye. However, the only female characters to play true villains are Hela in Thor: Ragnarok and Scarlet Witch in Dr Strange 2. It would be interesting for the MCU to diversify its rank of villains by bringing in Lilith.

It’s also worth mentioning that Lilith will appear in the Marvel RPG midnight suns. With his character freshening up in the minds of Marvel fans, the Blade movie could be one way to capitalize on it.

Blade’s first clue in the MCU is the Eternals post-credits scene, in which the voice of Mahershala Ali is heard calling Kit Harington’s Black Knight. So it would make sense for the Blade movie to be a partnership. In the comics, these two are agents of MI:13, the British intelligence agency that deals with supernatural enemies. Since it’s such an open category, this debut Blade film could feature the titular hero and Black Knight dealing with various small-scale but dangerous creatures.

It would also be a way to introduce different mythologies into the MCU. The Thor films, of course, involve many different gods and myths, but it’s rarely about how these deities interact with the people of Earth. MI:13 regularly takes up arms against the inhabitants of Otherworld, which is a pocket dimension that exists along the British Isles. While Otherworld is an entire realm, MI:13 most often interacts with the people of Avalon.

A simple way to introduce an MI:13 story would be to build on the plot of The Falcon and the Winter Soldier, in which the antagonistic Flag Smashers believe life was better after the Blip. Considering that MI:13 drove the Otherworlders out of the UK, the Blip may have given these creatures a chance to start returning to Earth. With everyone brought back Avengers: Endgame, Otherworlders may not return to their home realm quietly. Having this somewhat obscure group play Blade’s first villain(s) could be a really fun way to approach this character’s hero work and expand on the inclusion of mythology in the MCU.

In most of the Blade comics, the walker has battled the world’s most famous vampire. After all, any vampire hunter worth his salt should throw himself with Count Vlad Dracula. With so many stories to choose from, having Dracula as the first villain can give Marvel Studios an easy starting point. The film could feature Blade’s first encounter with the Count or any instance where Blade attempts to thwart a group of people attempting to resurrect the vampire. Leaning into lore, Blade could fit the tone that the MCU’s Phase 4 sets: dark and dangerous.

The MCU has a plethora of villainous options for its Blade reboot, each of which could make a great first movie. What audiences end up getting will depend on whether the studio wants to go for a simple origin story or something a bit more advanced. For now, fans can only guess who might show up opposite their favorite hero wearing a trench coat.

N. Alysha Lewis is an editor and writer whose work has been featured on HelloGiggles and SheKnows. She enjoys writing about pop culture, mental health, and personal experiences.